Kick off your Diploma in Social Innovation with an intensive, face-to-face workshop at the beautiful University for Peace. Join colleagues and like-minded changemakers from around the world to gather momentum for your Diploma at one of our short-term, onsite seminars. Your visit will also allow you to get to know us at the Centre so that we’ll have the basis for a relationship throughout the rest of the program.

Choose an upcoming workshop at the University for Peace to kick off your experience in the Diploma program:

After the onsite workshop in Costa Rica, return home and choose 4 additional online courses to complete within an 18-month period of time to earn your Diploma in Social Innovation.

Courses are flexible and are designed for working professionals.  Please visit our Frequently Asked Questions section for more information.

Don’t take our word for it! Click here to read testimonials from successful Diploma recipients and learn how the program helped them reach their goals.

GET YOUR DIPLOMA IN SOCIAL INNOVATION

What will you gain from the Diploma in Social Innovation?

Who should do the Diploma?

Anyone looking to create positive change in the world is a good candidate for this program. Participants hail from all sectors, and interests range from poverty alleviation and climate change to international development and education. If you need inspiration and a stimulating learning environment to take your plans to the next level, this program is for you.

The Hybrid Diploma in Social Innovation costs $2,875. Please note that this cost does not include transportation to/from Costa Rica and housing and meal costs while in-country for the onsite course.

We will be happy to offer suggestions for a variety of lodging options in Costa Rica, as well as help in estimating a budget for the onsite portion of your Hybrid Diploma program.

Take the First Step on Your Journey as a Social Entrepreneur 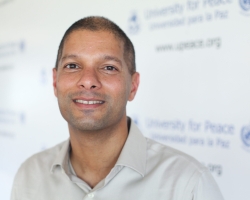 Mohit Mukherjee is the Founding Director of the UPEACE Centre for Executive Education. He is also the founder of Changemaker International, an organization focused on enabling youth to gain the skills to be social innovators. He has also served as Vice President of Programs for Watson U, the first incubator leading to a degree for next generation social entrepreneurs. Prior to these positions, Mohit Mukherjee served as Education Program Manager of the Earth Charter Initiative, a global movement of organizations and individuals promoting sustainable development. Mohit earned his Bachelor’s degree in Industrial Engineering from Stanford University in 1995 and did his Master’s at the Harvard Graduate School of Education in 2002. He currently resides in Florida.

Amr Abdalla facilitates the Skills for Effective Negotiations course and the Skills for Effective Negotiations onsite workshop. Currently based in Washington, D.C., Dr. Abdalla is Professor Emeritus at the University for Peace, and serves as the Senior Advisor on Conflict Resolution at the Washington-based organization KARAMAH (Muslim Women Lawyers for Human Rights).  Amr brings a multidisciplinary background to his graduate classes and workshops in conflict analysis and resolution, which he has conducted in Africa, Asia, the Middle East, Europe and the Americas. He holds a law degree from Egypt, a Master’s degree in Sociology and Ph.D. in Conflict Analysis and Resolution from George Mason University.

Miguel Tello facilitates the Mission Impossible? Measuring Outcomes & Impact course. He also facilitates the Positive Leadership workshop and offers onsite workshops on Circles and Restorative Justice. Miguel is the Executive Director of the Strachan Foundation, a family foundation that supports education and health projects throughout Central America. Miguel is also a Trustee and an Adjunct Professor for the International Institute for Restorative Practices, a graduate school in Pennsylvania. He offers restorative practices training and consulting to a variety of NGOs, schools, churches and criminal justice professionals in Central America. He holds master’s degrees in public administration and international studies from the University of Washington in Seattle. Miguel is originally from Mexico. He currently lives in Costa Rica with his wife and two sons. 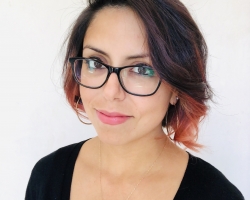 Laura García facilitates the Social Media for Social Innovation course. She is a Mexican multimedia storyteller with a wide range of television and online experience. She started working as a multimedia journalist started back in her home town of Mexico as a photographer for a newspaper. Between 2008-2009 she lived and worked in Austin TX for a little while before coming to the UK in September 2011.

Since then, she has worked in different newsrooms across the UK: ITV Meridian, BBC South East, BBC Radio Kent, NBC News, R4’s The World Tonight and ITN’s Channel 5 News. As a result of growing interest in UK politics since the vote to leave the European Union, every once in a while she works as a foreign correspondent for Imagen Mexico, Bloomberg Mexico and Estrella TV in Los Angeles.

Currently, she teaches journalists from all over the world how to spot and verify disinformation. She is passionate about diversifying the media, cofounded a social enterprise called PressPad and runs the UK chapter of the Worldwide Association of Women Journalists and Writers. 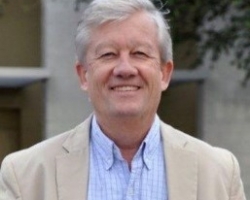 John Hardman facilitates the Regenerative Leadership course. He is a faculty member in the Department of Educational Leadership & Research Methodology at Florida Atlantic University, where he teaches Master’s and Doctoral level courses in school administration and qualitative research. Simultaneously, John is the departmental liaison to the Palm Beach County School District and the Chair of the College of Education’s Diversity Committee. John is also the founder of Regenerative Organizations, a consulting firm that specializes in helping facilitate organizational shift toward sustainability and regenerative practices. He is the author of ‘Leading for Regeneration: Going beyond Sustainability in Business, Education, and Community’ (Routledge, 2012). Originally from Argentina, John now lives in Florida.

Eliza Raymond co-facilitates the Entrepreneurship, Innovation & Social Change course. She is the co-founder and director of operations at GOOD Travel. This New Zealand-based social enterprise is working globally to transform the tourism industry into a force for GOOD. Eliza holds a Master of Tourism from the University of Otago in New Zealand where she researched good practice in voluntourism and tutored a variety of undergraduate tourism programs.

Eliza was a finalist for the 2019 New Zealand Women of Influence Awards as well as the winner of the travel category for the 2019 New Zealand Good People Awards. In addition to her work at GOOD Travel, she has worked on international development projects and social change initiatives in Peru, Kiribati, Tuvalu, Papua New Guinea, Guatemala, Chile, Nepal, South Africa and Kenya. 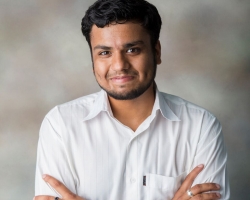 Abhinav Khanal co-facilitates the Entrepreneurship, Innovation & Social Change course. Abhinav is the Co-Founder & Executive Director of Bean Voyage, a non-profit social enterprise that provides training and market access to smallholder women coffee producers in Costa Rica and Nepal. He is also the Co-Founder & Chief Thought Officer at Little Big Fund, which provides knowledge, networks, and micro-grants to early-stage non-profit leaders around the world. He is a Cordes Fellow, Resolution Fellow, Trust Scholar, Watson Scholar, and a One Young World Ambassador. Abhinav has a B.A in Political Science from Earlham College. 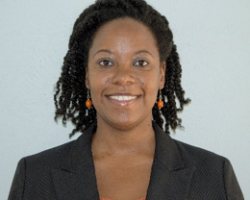 Kelley Haynes-Mendez facilitates the Designing Your Life course. Kelley received her Psy.D. degree in clinical psychology from the California School of Professional Psychology (Los Angeles) and is a licensed psychologist in the state of Texas. She is an associate professor with the Chicago School of Professional Psychology. Dr. Haynes-Mendez has more than a decade of teaching experience specializing in diversity, cross-cultural and international issues. She is a member of the American Psychological Association. She is the Vice President for Diversity and International Relations for the Society for the Teaching of Psychology (APA, Division 2), leading division initiatives to increase diversity and international partnerships. In 2008, she completed a guest lectureship in Cape Town, South Africa where she taught topics on family and intercultural studies. Dr. Haynes-Mendez also completed a Diploma in Social Innovation with the UN established University for Peace’s Centre for Executive Education in Costa Rica in 2017. She continues to collaborate with the UPEACE Centre for Executive Education to foster professional development for higher education faculty, staff, and administrators. 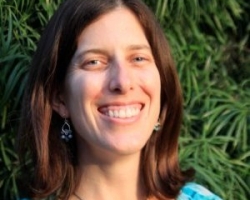 Stephanie Knox Steinerfacilitates Educating in Changing Times: Reflect, Rethink, Rebuild. She is a peace educator and lifelong learner. She is currently a doctoral candidate in the Community, Liberation, Indigenous and Ecospychologies specialization at Pacifica Graduate Institute, where she researching decolonial pedagogies and the spaces that make them possible. She has taught courses on peace, nonviolence, justice, sustainability, human rights, and service learning at San Diego City College and Chapman University. In addition to her classroom teaching, she has served as the Director of Education for the Metta Center for Nonviolence and as the Peace Education Program Coordinator at Teachers Without Borders (TWB). She earned her Master of Arts in Peace Education from the University for Peace in Costa Rica, and her Bachelor of Arts in Environment and Development from McGill University in Montreal. She is also a mindfulness practitioner and member of the Earth Holder Community care taking council, an organization that engages at the nexus of mindfulness, earth and racial justice. She is currently based in Colorado.

Shelly Galvin facilitates the Tackling Finance in the Social Sector: From Fundraising to Impact Investment. She is leading technology learning company CBT Nuggets’ Director of Corporate Social Responsibility and Engagement. Shelly is a pioneer of modern corporate philanthropy. She has worked as a fundraiser and consultant globally with nonprofit organizations, NGOs, and social entrepreneurs. She also worked on a proposal development and business development team with small companies in Africa and the Middle East competing for USAID project funding. She’s won funding for projects large and small, from a $5,000 campaign for diversity in education training for local teachers to a $300M infrastructure project for USAID West Bank/Gaza. Most recently, Shelly helped NGO Drop in the Bucket win $100,000 from Coca Cola to aid South Sudanese refugees, the first time Coca Cola’s philanthropic arm has supported disaster relief efforts. Shelly holds a Diploma in Social Innovation from the University for Peace (UPEACE) Centre for Executive Education.