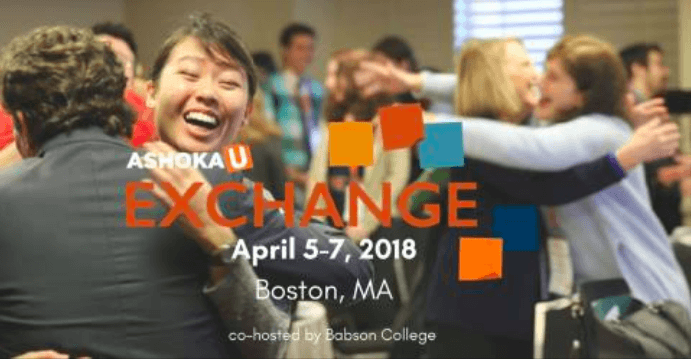 If you had been in Boston earlier this month without a ticket, you would have been out in the cold (literally)! Ticket for a big concert? No, for the Ashoka U Exchange conference, targeting an audience who believe that colleges and universities must support students to be changemakers. The event sold out with over 700 attendees from 150 countries!

Over the past five years, I’ve been attending the Ashoka Exchange and seen the number of attendees grow steadily. But what’s been more interesting is to note how the conversation has evolved. There has been a movement away from a focus on ‘social entrepreneurship’ to the broader field of ‘social innovation’. This goes beyond the notion of starting and growing a social enterprise and looks at developing the skills and mindset of social innovators. Social innovators work in a variety of settings, from a single classroom in a public school to working for a big business. But what unites them is that they are all driven to make positive change happen. They share what Marina Kim, co-founder of Ashoka U, calls the “super skills” of social intrapreneurs in this piece.

The Ashoka Exchange is one conference that I try to attend every year (except when I rupture my Achilles the week before). It provides me the opportunity to not only to meet up with people who are passionately working in this space, but also to share what’s uppermost in my mind. A couple of years ago, I spoke in a panel about the need and opportunities for changemaking in K-12 education. Since then, we’ve incorporated these ideas into the Centre’s 1-week summer course for educators, ‘Global Education: Innovating in your classroom’.

This year, the Exchange launched a new format call ‘Big Ideas Talks’. Big Idea Talks showcase well-formed ideas that inspire in just 12 minutes, TED-style. I put my name forward for the one under the theme ‘What keeps you up at night’. Oh, so many things! So, not a difficult one for me to talk about, and 12 minutes flew by. So, what was my ‘Big Idea’? I won’t keep you in suspense any longer!

Here’s a quick snippet from my talk, titled, Social Entrepreneurship – A pathway to happiness. “I see social entrepreneurship’s potential as much about impacting others positively as it is about having a positive impact on oneself. Finding happiness is challenging. The journey of a social innovator is one path of leading a life of meaning and purpose. It integrates in all the pillars of positive psychology. To me, it’s become as much about a changemaking mindset and life-affirming values, than the practical business skills of launching and growing a sustainable social enterprise.”

Cutting-edge stuff, right? Remarkably, a focus in this year’s Exchange was on the connection between social innovation and well-being! One of the opening keynotes was delivered by Dr. Aneel Chima, from Stanford’s Initiative on Human Flourishing, where he’s s helping to shape the emerging science of well-being and educating the next generation of thought leaders.  In his own words, “The inner journey needs to be aligned with the outward journey. If we are experiencing burnout, doubt, and uncertainty in ourselves there has to be a parallel in our work.”

Without a doubt, the Ashoka U Exchange helped me along my inner journey. At one point on the second day, my head was so full of ideas that I decided to step out of the conference venue to take a stroll outside. It was freezing in Boston and had been snowing just a couple of hours prior, a very different environment than UPEACE in Costa Rica.  Part of what is I find enriching about stepping out of my usual context, meeting people who share a similar passion for social innovation education but have very different contexts, and being exposed to new ideas is that I feel that I walk out a different person, in just three days.  So, I’d like to share with you one key take-away from my three days. It was not entirely new for me, but it hit home in new way.

My ‘Ah-ha’ moment came from Bill Drayton, founder of Ashoka, in his opening address. He explained how the ability to learn the skills of cognitive empathy, teamwork, leadership and changemaking is essential. It’s the new literacy in this “everything changing world”. Without it, larger and larger segments of the global population will be marginalized. It was a moral call to everyone in the room to move towards this new vision of education.

I first met Bill Drayton over fifteen years ago, also in Boston.  His message has evolved since that first meeting where he described ‘changemakers’ as a special kind of person, to today’s “everyone a changemaker” message. But the world has evolved dramatically too.

And fortunately, I had a ticket!

Mohit is the Founding Director of the UPEACE Centre for Executive Education. As an educator-entrepreneur, he has been immersed in the field social entrepreneurship education since 2001. In his role with UPEACE, he has developed and taught over 50 seminars in several countries (USA, Costa Rica, Switzerland, Guatemala, Puerto Rico, India, Bangladesh, Haiti, and the U.K) on themes ranging from Innovation in Education to Designing Your Life. Mohit has recently authored a handbook for young social innovators, where he encourages his audience to enjoy the journey!