When it comes to climate change, many people are concerned about the problem but don’t know what they can do to address it. The problem is so big that it can feel overwhelming to individuals acting alone. Thankfully environmental organizations are building an incredible grassroots movement that brings people together to find creative ways to solve the climate crisis.  Now we can add an additional tool to the mix: a collective investment effort for clean energy.

RE-volv, a non-profit organization based in San Francisco, offers an exciting new way we can reduce carbon and build the clean energy future we want as part of a collaborative effort.  RE-volv has started a revolving fund, called the Solar Seed Fund, to finance solar energy projects for community-serving organizations. The revenues earned from one solar project go to pay for the next one, allowing the fund to continuously grow over time.  The money to finance the projects is raised through crowdfunding, so we all can be a part of solving the climate crisis and building renewable energy in our communities.

This month RE-volv announced the signing of its first solar lease agreement with the nonprofit Shawl-Anderson Dance Center in Berkeley, California. RE-volv will finance the solar installation using money raised from a recent and highly successful crowdfunding campaign. The nonprofit SunWork Renewable Energy Projects will install a 10kW solar energy system that will cover nearly 100% of Shawl-Anderson’s electricity usage.  Shawl-Anderson will make no upfront investment, will save thousands of dollars on their electric bill over the course of the 20-year lease, and will own the system at the end of the lease. On top of that, the lease payments, when invested through the Solar Seed Fund, will finance an additional three community-based solar energy systems during the lease term.

Through crowdfunding, anyone can contribute to the Solar Seed Fund and be a part of this community effort to create a clean energy powered world. Together, we’ll serve numerous community-based organizations with solar energy, reduce their carbon footprints, save them money on their electric bills, and educate their community members about solar. We’ll be setting into motion a revolving solar fund that grows on its own for the purpose of serving countless communities with solar.

RE-volv is now looking for the next community organization to partner with for its second solar project.  You can help RE-volv in its efforts by donating to the Solar Seed Fund, joining our mailing list, helping to spread the word about us on Facebook, and volunteering. To learn more, visit www.re-volv.org or feel free to get in touch with our staff.

About the Author:
Andreas Karelas graduated from UPEACE’s Natural Resources and Sustainable Development program in 2007.  He founded RE-volv in 2011.  He’s also benefited greatly from taking the UPEACE Center for Executive Education online courses Entrepreneurship, Innovation and Social Change and Designing Your life: Innovating From the Inside Out. 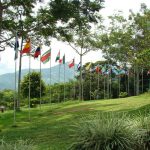