Farewell but not goodbye

Alonso Muñoz had been working at Center five years. He took a course on nonprofit leadership in 2008 and on the final day of the course he let me know that if I ever needed some help, he would gladly be there. At that time, the Centre was a one-person operation.  A few weeks later, I called Alonso. I had been feeling the need to bring on someone else for a while, but had not even had a chance to even draft a job description. Alonso had created a position for himself – just by asking.

Over the past 5 years, we have shared so many moments that create memorable anecdotes, but let me pick two to pass on today – one from Alonso’s first week and one from the last week with the Centre.  Alonso’s first assignment was to be the point-person for a 40-person group of MBA students visiting Costa Rica from Arcadia University. We ended our week-long course in Manuel Antonio. As we checked in, the hotel told us that there was nothing left for Alonso nor me – we had filled the hotel with our students. Alonso and I ending up sharing a rickety spare room above their kitchen with no air-conditioning.  I had the feeling that I was back in college…but Alonso took it in stride, and this was just the beginning of my closest working relationship.

In Alonso’s last week with the Centre, he visited me in Florida, where I have been based since 2010. This was his 6th trip to my house since we began working together. One evening after dinner, my wife and I were chatting and looked over to our daughters. Soleil, who’s five, was swinging on Alonso’s arm and seven-year old Zelia was engaged in a deep conversation with him about who knows what.  Alonso had become an integral part not only of my professional sphere, but of my family as well.

Alonso – I look forward to following your personal and professional journey. Thank you for walking beside me these last 5 years – I have valued it tremendously and the Centre would not be where it is today without you. In your work with the Centre and your help building the Diploma in Social Innovation, you’ve embraced the core principles of a social innovator – pushing yourself to continuously grow, taking risks, trying new things and, finally, making positive impact, for yourself, on me, and on over a thousand Centre alumni around the world! 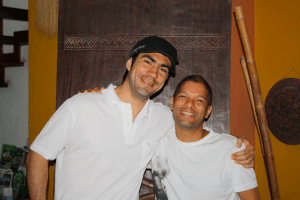